A couple of years ago, shortly after starting this blog, I did an online search for other Michigan food bloggers, with the idea of doing a little networking. At the time, I found only one in Detroit proper, a vegan blogger to whom I reached out but was ignored (oh well). However, I did come across a few bloggers in the Ann Arbor area as well as a couple in the far Detroit suburbs. Several of them had been in contact with each other for a year or so and had formed a small (back then- now over 100 members!) Google group called the Michigan Lady Food Bloggers. This was used for support and networking, linking to each other’s pages, asking each other food-related questions, sharing articles, and occasionally hosting potluck gatherings. Not knowing any other food bloggers “IRL”, I was really excited to connect with these ladies, some of whom had already been blogging for two or three years. Cynthia (aka Mom), Shayne, Alex, Patti and Maggie were just a few of the members who participated regularly in the mailing list and who helped bolster my confidence and enthusiasm for blogging in that first year. 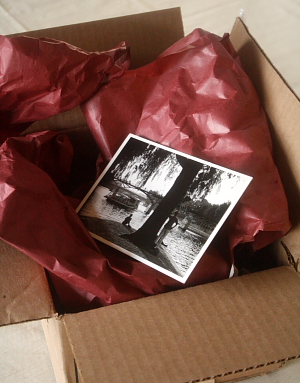 There was another person on the list whose blog drew me in instantly, with its evocative photography and memoir-like stories of her family and childhood in Algeria. We shared the small bond of speaking French, exchanging the occasional email or blog comment en français. And although her life as a married, Muslim mother and homemaker (not to mention recently arrived U.S. resident) was worlds apart from my own, we hit it off, and I came to think of her as a friend.

Although we still haven’t met in person, both of us missing MLFB gatherings the other was attending, we have kept in touch over email and Facebook. When a freelance writing opportunity came my way that I was unable to pursue, I immediately thought of Warda- not only was it for a publication in her neck of the woods, but I knew that her beautiful writing style would be an asset to any editor.

Imagine my delight when, a couple of weeks later, I came home from work to find a package with a carefully wrapped box inside and a postcard thank-you. Inside the box were eight makrouds, golden, buttery diamonds of semolina, each soaked with a honey syrup and filled with date paste (two were, irresistably,  enjoyed upon opening, which is why the photos show only six). The pastries  were lightly scented with orange flower water, which reminded Marvin of desserts his Iraqi grandmother used to make. Although I had no such taste memory to transport me back to childhood, I savored every crumb, nibbling slowly to draw out the sweet pleasure.

Over the next few days, every time I ate one of the makrouds, I thought how I was lucky to have encountered (even if only virtually) this talented woman, whose skills in the kitchen are apparently equal to her (trilingual!) skills with the written word.  One of these days we might meet for tea or a trip to a specialty market, and chat in franglais. But even if our busy schedules don’t permit that any time soon, I will still consider her une amie.  Do yourself a favor and check out her lovely words and photographs on her blog, the 64 Sq. Foot Kitchen.