I had heard of yuca (also spelled “yucca” and also known as cassava or manioc) before and knew it was a type of root vegetable, but had never eaten it until last year at Marvin’s mom’s house.  She had made a sort of Puerto Rican “shepherd’s pie” with ground beef, tomatoes, garlic, carrots & onion, covered by a layer of mashed yuca and baked in the oven.  I immediately loved the texture and flavor of the yuca- people compare it to potatoes, but its consistency is much more dense and “wet”, and it has a subtle sweetness to it. 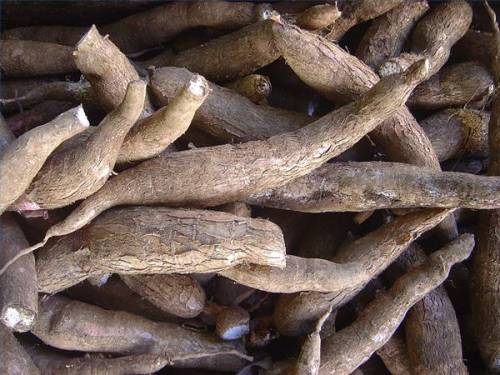 Puerto Ricans also use yuca to make pasteles de yuca, a variation of a treat made on special occasions that consists of seasoned stewed pork enclosed by a dough of mashed yuca, the whole of it assembled and cooked in banana leaves.  Pasteles could be called the Puerto Rican equivalent of tamales, and due to the labor-intensive nature, are usually only made around holiday times with multiple family members lending a hand. 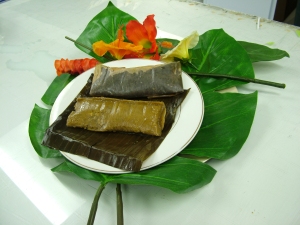 You’ve probably consumed the yuca plant lots of times without realizing it- the flour made from the cassava plant, high in starch and an excellent thickener,  is none other than tapioca.  The plant is a staple in many countries in South America and Africa, especially where other plants have difficulty growing.

If you want to experiment with yuca, you can find it in the freezer section in some Latino supermarkets; the popular Goya brand sells it in large chunks or pre-grated.  I hope to obtain Marvin’s mom’s recipe for the shepherd’s pie and post about it soon.