So, I know it’s Christmas Eve and you’re all probably running around doing your last-minute preparations.  But I’ve been sitting on this post for a long while now and wanted to get it published- there’s a recipe for romesco sauce that you just might be interested in if you need a last-minute appetizer for a Christmas or New Year’s party.

There ain’t no party like a Detroit… sherry tasting!

Those of you who have been following this blog are familiar by now with the GU Detroit*, a loose collective of “food and drink professionals and serious enthusiasts”. A couple months ago the topic of sherry came up in the forums, and since no one was extremely knowledgeable, and because we all love an excuse to get together and imbibe, our friend and cohort Suzanne seized the occasion to host a sherry tasting.

*That’s “gee-you Detroit”, short for Gourmet Underground, not “goo Detroit”, in case you were wondering.

The GU Detroit gang being what it is, I shouldn’t have been surprised to walk in and see a large table groaning with the weight of what seemed like several tons of food- Spanish charcuterie, cheeses, olives, and tapas of all sorts were nestled in tightly, and I was challenged to find room for my contributions.  Although I should be used to this kind of spread at a GUD event, it was still a bit overwhelming and I had that “kid in a candy store” feeling for at least the first hour I was there.

In addition to about 10 or 12 types of sherry, there were wines (including several bottles of Les Hérétiques, a GUD favorite that Putnam and Jarred turned us on to) and homemade cider my brother brought.  The tasting was semi-organized in relation to the number of people there- someone (Evan or Putnam, I’m guessing?) had lined up the bottles in order from the pale finos to the darker, richer olorosos so that we could attempt some semblance of a proper tasting.  However, due to the somewhat chaotic nature of the event, I can’t tell you much beside the fact that I preferred the lighter sherries;  the intense raisiny flavors of the darker sherries were not as much to my liking. 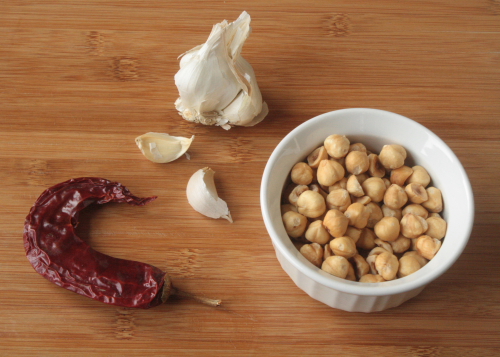 I hadn’t had a chance to cook for quite some time, so the day of the party I decided to go all out and make three different tapas to bring.  Flipping through The New Spanish Table, I came across a recipe for deviled eggs with tuna (which I blogged about in a less breezy post than this) that sounded perfect. I also made a batch of romesco sauce from the same book, a paste (although that word makes it sound less appealing than it is) made from hazelnuts and peppers and garlic and sherry vinegar that can be eaten with crudites. Last but not least, I sauteed some button mushrooms with garlic and parsley.  I think I’m at my cooking-mojo best at times like these- when I have the day to consecrate to the task, and an event to prepare for.

I can’t wait for the next GU Detroit gathering, aka excuse for me to actually cook.  I’m not anticipating doing much cooking to speak of in the next month (not counting lots of scrambled eggs/omelettes and salads for dinner), as I focus on packing and moving house and getting the new house in order, so unless there’s an event to kick me into gear it may be a while before you hear from me, at least regarding new recipes! But I’ll be around, regaling you with other food-related news and happenings.

For now though, here’s the romesco recipe.  If you’ve never tried it, I strongly encourage you to do so- it’s a nice break from all the roasted red pepper hummus and cheese spreads and ranch flavored veggie dips so prominent around this time of year.  In addition to using it as a dip, it has other applications as well- in the Zuni Cafe Cookbook, Judy Rodgers cooks shrimp in it (I’ve made this too and it’s uhhh-mazing!!) and I can picture it as a great sauce for chicken too. 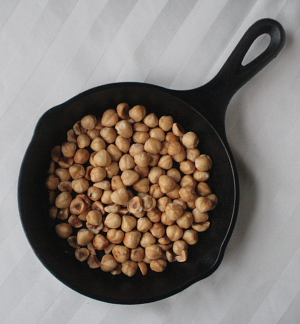 Notes: I could not locate a ñora pepper or ancho chile when I made this last time, so I used something labeled “chile California” which, although inauthentic, worked fine. Also, almonds may be substituted for the hazelnuts, or a combination used. The sauce will have a slightly different character but will still be delicious.  If you want to gild the lily, fry the nuts in olive oil instead of dry-toasting them.

Soak the dried pepper in very hot water until softened, about 30 minutes. Remove and discard the stem and seeds and tear into small pieces, either before or after the soaking, whichever is easiest. Reserve the soaking liquid.

Place the nuts in a food processor and pulse a few times until roughly chopped.  Add the garlic, pepper, paprika, tomato, breadcrumbs, cayenne and ⅓ cup of the pepper water and pulse until fairly smooth but retaining some texture.  With the motor running, drizzle in the olive oil, processing until completely incorporated.

Scrape the contents into a clean bowl, stir in the vinegar, and season with salt to taste.  Cover and let sit for at least 30 minutes at room temperature for the flavors to meld, then taste and season with more salt or vinegar as necessary.

Serve with crudités such as endive leaves, fennel or celery sticks, or use as a sauce for grilled shrimp, chicken or asparagus.