It began with a mysterious email from James last week titled “secret dinner”. Someone in Detroit was throwing a dîner en blanc– did we know about it? Were we going?  Not yet, and absolutely. James’s invite had come in the mail* from an unknown source, instructing him to invite 10 people who could also each invite 10 people. White linens, real tableware and formal all-white dress were specified. We were instructed to arrive on Belle Isle at 5pm; a Champagne toast would be provided at 6:30. We were not to discuss the event with anyone other than invited guests.

*Update 8/22/11: I picked up mail from my old house today, and can you guess what was in the pile? My very own printed invitation to the event. Still no clue who sent it, but that eliminates any close friends/ acquaintances since whomever sent it didn’t know I moved 6 months ago! 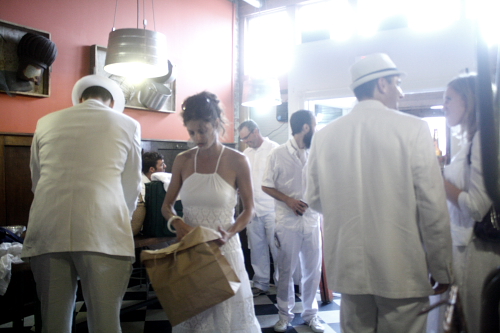 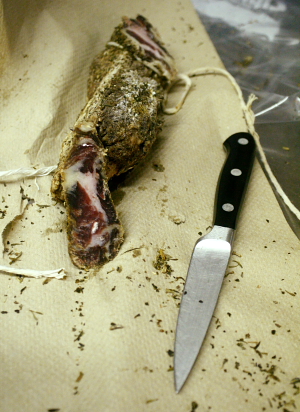 We began organizing in earnest, coordinating who would bring what food, chairs, tables, etc. Due to the last minute nature of the invitation, many of our friends were out of town or otherwise engaged. However, when our contingent assembled at Supino in the Eastern Market to make our way toward Belle Isle, we were a respectable 15 strong. The earliest to arrive sipped Jolly Pumpkin Oro de Calabaza and Domaine de la Pepière Muscadet from paper cups while we awaited the other guests. The anticipation mounted as the pizzeria became a hive of activity- James slicing up his home-cured coppa; 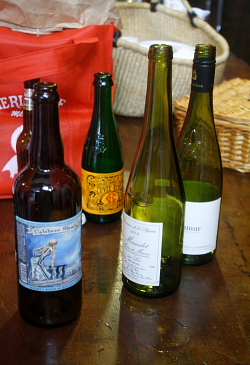 Christina baking bread and grabbing jars of Detroit Zymology Guild’s pickled asparagus from the basement. We chatted and checked out each other’s all-white outfits, a rather strange sight in this group. We weren’t all in formal wear by a long shot (the guys actually outdid the women in this department, with three or four natty suits in the group), but our ensembles respected the spirit if not the letter of the invitation. We gazed upward at the drizzling sky, hoping the rain would abate but thankful for no thunderstorms and determined to have a party regardless. 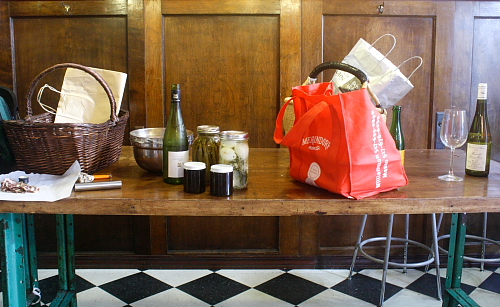 Once all were present, our merry caravan made its way east with tables, chairs, linens and what seemed like several metric tons of food and wine. As we approached the western tip of the island, we were surprised to find that we were forced to park a good quarter mile from the site, and marveled over the number of other white-garbed picnickers (none of whom we knew) heading in the same direction. Upon arrival, a festive tableau awaited- rows of tables outfitted with white tablecloths, floral arrangements and fine china, with diners of all (adult) ages decked out in pale finery.

We began to set up our tables only to quickly discover that we had brought far too much food to be able to actually sit down and eat at the table, let alone have proper place settings. I felt a bit let down at having failed at this part of the instructions, but the feeling quickly subsided as I surveyed our generous spread. I remarked to the others that our group might be the scrappiest, eating standing up, several of us in thrift store attire, but there was no question we had the best food. It didn’t hurt that we had two of the city’s top chefs, a restaurant owner and several small food biz entrepreneurs in our gang. 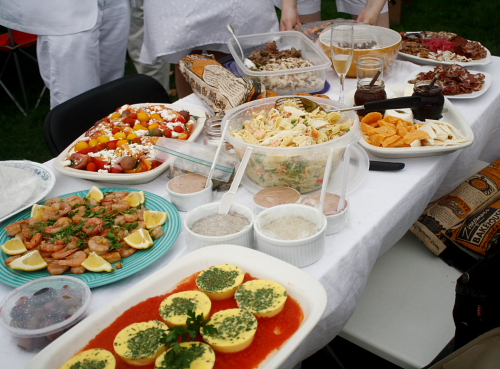 As we settled in, a large man in a red shirt walked up to address the party at large, announcing himself as the head park ranger of Belle Isle. A ripple of anxiety passed through the crowd, but we needn’t have worried. He said he had been tipped off via email about the event, and wasn’t sure whether to call the cops or welcome us… so he opted for the latter. This brought a hearty round of applause. With a few words about the uniqueness of Belle Isle, he told us to enjoy our meals and was off.

With that, we were free to dig in. But where to start? A charcuterie platter with six kinds of meats, all homemade, would certainly work. Or perhaps one of the dozen or so cheeses? A trio of pâtés, so perfectly unblemished in their white ramekins, provided too much temptation to resist. And it went on- smoky grilled shrimp with fat chunks of lemon. Two colorful garden tomato salads. A bitter spoonful of radicchio sautéed with homemade guanciale. Luscious cured salmon salad with crème fraîche. Collards and artichokes in red Thai curry with a side of quinoa. A taste of my own offerings- savory zucchini bread and roasted garlic herb custards with tomato coulis (recipes to be posted soon). And despite sampling all of that and more, you best believe I left room for Christina’s rustic peach tartlets. My apologies to my friends for my temporary utter loss of vocabulary- all I could manage in between bites was “oh my God” and “this is ridiculous”, repeated like a bum vinyl record. The sky pissed weakly for almost the entire dinner, but other than a little frizzy-haired vanity it mattered little. 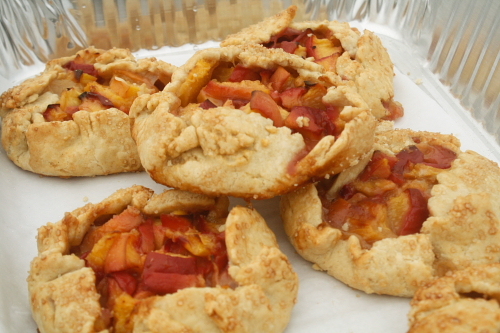 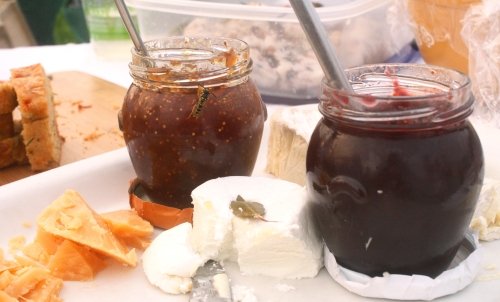 The toast came and went but no Champagne materialized, at least not where we were sitting. This was more than fine though, as we had our hands full with Oregon pinots and gamays and James’s homemade orange wine (not made from oranges, but with a slight orange hue due to being left on the skins). Somewhere in the midst of the feeding frenzy, Marvin showed up with his camera, and before long we were assembled at the island’s prow with the city skyline as our backdrop. I took the break from the table as an opportunity to say hello to some other friends who had been invited independently of our contingent- like us, they had no idea who had planned the event, or at least that’s what they claimed.

We ate and drank and laughed as the sun set, my cue to pack up. (I heard from those who stayed longer that they were “escorted” off the island by the park rangers, whose leader may have regretted his magnanimity.) In the end, it didn’t really matter who organized the dinner, or if we followed the rules to a tee (although I admit I am a person who appreciates the beauty of rules and order as well, and was slightly jealous of the folks with the flower-bedecked tables and fancy dress). We enjoyed one of the few remaining summer Sundays in lively company, and with some of the best food and drink to be had in the city. It may not have been as grand as Paris or New York’s, but I tip my hat to the anonymous planner of Detroit’s first dîner en blanc and hope it may be the first of many such happenings, secret or not. I won’t say I don’t appreciate a little mystery and drama, but for me, it’s all about the food and friends. 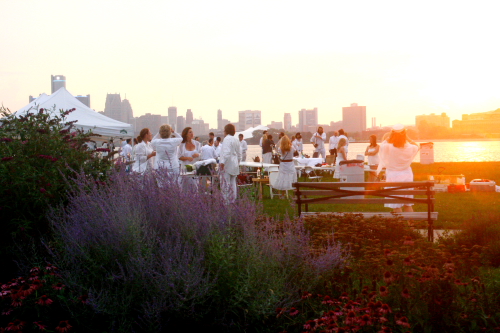 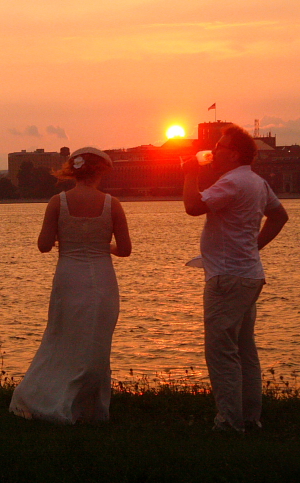