Everywhere I turn- on Facebook and Twitter and even *gasp* real-life conversations (remember those?)- people are, to put it gently, lamenting spring’s tardy appearance this year. Don’t get me wrong, I’d love to ditch the scarf and gloves, and temps in the 60s would feel balmy right about now, but I try not to dwell on that which I cannot change. Instead, I’m trying to transition as best I can, by cooking foods which satisfy both the craving for something warm and hearty, and the desperate longing for something green. 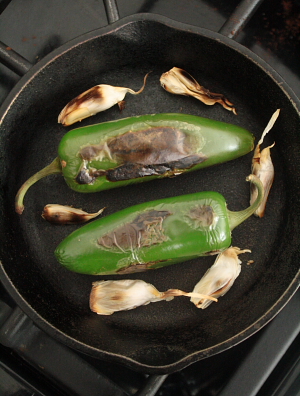 When I prepared my prosciutto leg in January, I had a fair amount of meat (and bone; see above) left over from the trimmings. I took some out of the freezer a couple weeks ago to make a Oaxacan pork stew.  I’m sure the very word “stew” conjures rib-sticking, squarely winter food, but bear with me. The dish incorporates plenty of green things like tomatillos and squash and an herb purée that gives it a lively perk and, when stirred in, turns the color from olive-drab to a brilliant emerald.  The stew’s heat (both temperature and spice-wise) will fend off these last bouts of winter chill, while the vegetables and herbs will prime your palate for green things to come.

I served this one night to my friend Amanda, wh0 has visited Oaxaca with her Mexican beau, and she said it was very similar to something she had tried there. I wouldn’t expect anything less of a Rick Bayless recipe- this one comes from his book  Rick Bayless’s Mexican Kitchen. The only change I made was to use zucchini in place of the chayote because the market was out of it that day, but I think it’s a fine (if less authentic) substitution. I also used frozen green beans because I prefer them over the somewhat large, tough specimens that are found in stores this time of year. 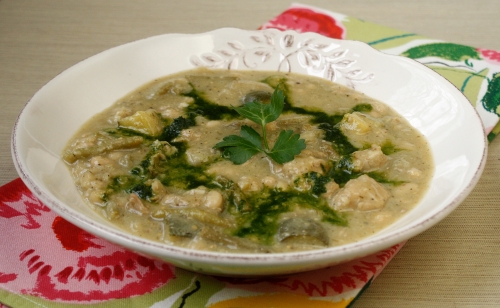 If you still think that stew is too much of a winter dish, I would humbly remind you that in Mexico it is MUCH warmer than it is in most parts of North America, and they eat stews like this all the time! I won’t preach to you about not being deterred by the long ingredients list or prep time; this is unapologetically a recipe for those who may actually enjoy spending an afternoon in the kitchen. Might as well, since it’s still too cold to go outdoors. 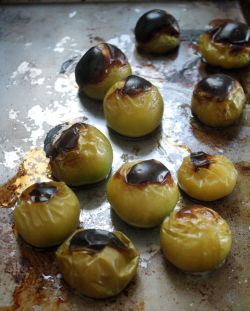 Place the meat and bones in a large Dutch oven or cazuela and cover with 3 quarts water. Bring to a boil, skimming the gray foam that rises to the surface. When no more foam surfaces, add the beans, minced garlic and onion. Partially cover and cook at a gentle simmer until the beans are cooked and the meat is tender, 1 ½- 2 hours. Add any water as needed during cooking to keep the beans and meat covered.

Meanwhile, roast the tomatillos on a baking sheet 4 inches below a very hot broiler until soft and blackened on one side, about 3-5 minutes; turn them over and blacken the other side. Transfer tomatillos along with any juices to a blender or food processor. Heat a cast iron skillet or heavy griddle over medium heat. Roast the chiles and unpeeled garlic in the dry skillet, turning frequently, until soft and blackened in spots. (Note: I found it helpful to keep the garlic on the outer edge of the pan to avoid burning.) Peel the garlic and roughly chop it with the chiles. Add to blender along with the cumin, cloves and pepper, and purée until smooth.

When the meat and beans are tender, pour them into a colander set over a large bowl or stockpot. Remove the bones, picking them clean of any remaining meat and adding it back to the colander. Set colander aside. Skim the fat from the top of the broth.  Wash and dry your Dutch oven or  cazuela, set over medium heat, and add the lard or oil. When hot, add the tomatillo purée- it should sizzle sharply (test a drop first). Stir constantly for about 5 minutes to thicken. Add 4 cups of the pork broth, partially cover, and simmer over medium-low heat for 15 minutes, stirring regularly. Add the chayote or zucchini and green beans and cook 5 minutes longer.

In a small bowl, whisk 2/3 cup broth with the masa mixture, mixing well to remove lumps, then whisk into the stew base until thickened. Return the meat and beans to the stew pot. Season with salt to taste, usually about 2 teaspoons. Let the stew simmer gently while you prepare the herb mixture.

Purée the herbs with 1/3 cup broth in a blender until smooth. (If you are short of broth, you can use water.) Stir the puréed herbs into the stew. Add broth or water as needed to achieve a medium-thick consistency. Ladle into wide soup bowls, garnish with additional parsley, and serve immediately with warm corn tortillas. If not eating all of the stew immediately, stir a spoonful of herb mixture into each individual serving rather than the whole pot, reserving the remaining mixture to add to the stew when reheating it.