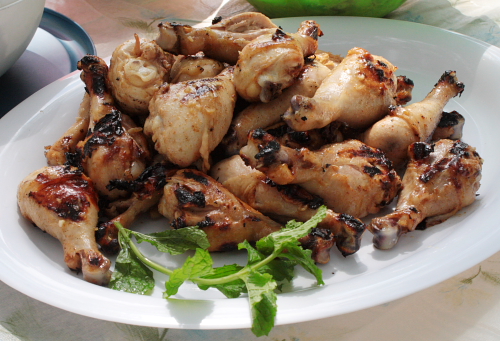 In my last post I alluded to a picnic with some fellow Detroit gourmands, some of whom I introduced to you in this post.  We’re a growing group, and we decided to have a potluck picnic on Belle Isle as an excuse to eat, drink and get to know each other a little better. Molly and Todd scoped out the perfect spot under some willow trees, on the banks of the Detroit river with a view of the city. 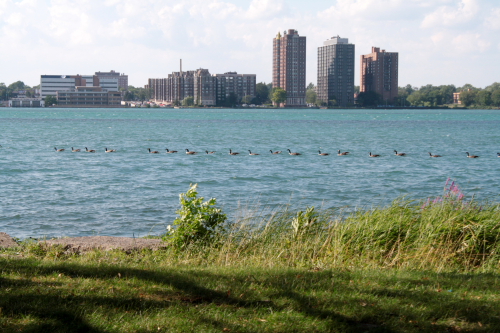 Knowing this group, I had high expectations, but wow… I have to say I was pretty blown away by how much everyone put into it.  Dave (aka Captain McBoozy), James and Evan ruled the drinks department- Dave made a Rhubarb Rum Punch and some Prescription Juleps, Evan brought a chartreuse-and-pineapple juice concoction,  and James (our resident coffee-roaster and token Romanian-American) made a fabulous cocktail with cold-brewed coffee, vodka, passionfruit syrup and Romanian mountain mint. 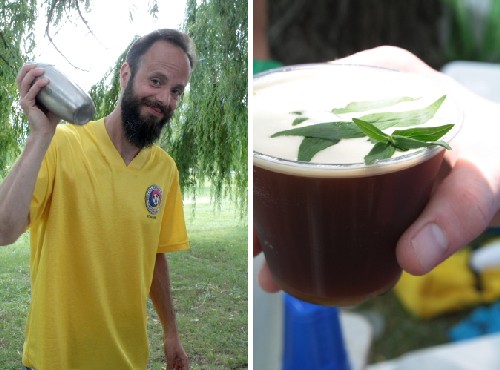 The food was no less spectacular… I displayed an incredible amount of willpower and paced myself perfectly so that I was able to nibble and sip on and off all day while never feeling uncomfortably full or overly tipsy.  This was no small feat, since it was pretty much a spread to end all spreads. My contributions were a big bowl of chlodnik and a mess of honey, cumin & lime-marinated grilled chicken (grilling courtesy of Todd, thanks dude!).  The rest of the food I almost hesitate to list for fear of inadvertently leaving someone out, but there

We whiled away the afternoon until it slipped into evening, and somehow managed to dispatch almost all of the food.  We were even making ham sandwiches towards the end of the day, with leftover marble rye, mustard, and some J&M German bacon (not really “bacon”; more like the best ham you’ve ever had).  As the sun set over the city, we packed up our belongings and mused about how perfect the day had been, and wondered aloud how soon we could do another picnic. 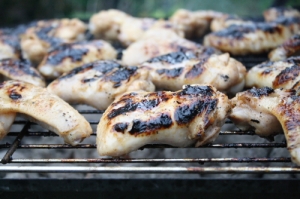 Back to the chicken- this isn’t the first time I’ve made this chicken, but I usually make it with wings for a better meat-to-marinade ratio.  The drumsticks weren’t bad, but I think I’ll revert to using wings from now on.   It was hard to “name” this recipe because all of the marinade ingredients are bold and prominent- the sweet-tart punch of honey and lime, the toasty warmth of the cumin and cayenne, and the savory hit of garlic all contribute to a sauce that sings with flavor.  The elements are inspired by Middle Eastern cuisine, but I’ve never had anything like it in a restaurant or come across any similar recipes in any cookbooks or blogs, so for now I’ll claim it as my own.  We couldn’t do this at the picnic, but if you’re near a stove, the leftover marinade (boiled and reduced) makes a killer dipping sauce.

To see the full set of photos from the picnic, check out my flickr set. 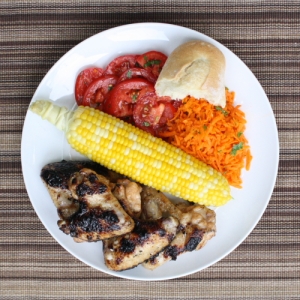 Combine marinade ingredients in a small bowl or glass measuring cup, stirring to dissolve the honey.  Taste to see that the sweet/sour flavors are balanced.  It should taste pretty pucker-inducing, but the heat will tame some of the acidity.  Taste for spiciness as well, adding cayenne as you see fit.

Wash and pat the chicken dry.  Place in a sturdy Ziploc-type bag with the marinade and seal, expelling as much air as possible.  Marinate for at least an hour, longer if possible.

Grill the chicken over medium heat, turning frequently and basting often with the marinade (this should take about 15-20 minutes for wings; slightly longer for drumsticks.  If unsure, use a meat thermometer and cook to 160°).  If you like, boil down any remaining marinade on the stove until slightly thickened and use as a dipping sauce.