soup swap mach II: four soup recipes to see you through ’til spring

Last year I had the rather brilliant (if I do say so myself) idea to host a soup swap for myself and some girlfriends.  The concept was simple: do the work of cooking one soup, but wind up with a fridge full of 4 or 5 different soups.  This was mostly born from the fact that while I love to cook big batches of things to take in my lunch for the week, I don’t exactly want to eat the same thing 5 days in a row.  So, in what I hope will become an annual tradition, we got together and traded soups (and stories of youthful indiscretions, but that’s for another blog… or not!).

Once again I made two soups, this Cheese Soup with Caramelized Onions & Cumin (sooo good!!), and an “African-inspired” carrot soup from Moosewood Daily Special that had peanut butter, lime and chili sauce. The carrot soup sounded like a good idea at the time, but I had to majorly tweak it to get it to taste good to me.  I added a pretty significant amount of brown sugar, upped the peanut butter, and also added coconut milk.  It ended up tasting like peanut satay sauce, which I guess was not a bad thing, but the fact that I altered it so much makes it pretty impossible to give a recipe.  (But make the cheese soup- that turned out great!)

This year’s batch of soups were no less delicious and satisfying than last year’s. So without further ado, here are my “tasting notes”.  For the recipes, just follow the links. 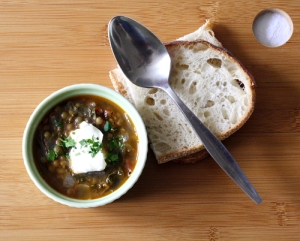 French Lentil Soup
First of all, the “French” refers to the type of lentils used, not the style of the soup, so don’t worry- it’s not some heavy-cream-and-butter bomb!  French green (Puy) lentils are so great in soup; they are much firmer than regular brown lentils and have a nice chew to them.  This soup is seasoned with mint and cinnamon, among other things, which gives it a delightful Middle Eastern feel. There is an optional garnish of thick Greek yogurt.  I would up the suggested salt content a tiny bit, but other than that I found it to be just right as-is.  Oh, and there are greens in it too so it’s super healthy.  Thanks Kate, this is definitely going into the rotation!

Caldo Tlalpeño (Chicken, Chipotle & Chickpea Soup)
The soup for those who like to eat alliteratively! Amanda says she makes this for weeknight suppers on a pretty regular basis, and it seems pretty straightforward and simple.  The only thing that might throw you off is finding fresh epazote, but I believe she made this batch without and it was still delicious.  I tend to prefer dark meat so I would probably sub out an equal weight of bone-in, skinned chicken leg quarters, but that’s just a personal preference and it was certainly good (and probably a bit healthier) with the breast meat.  Although it’s not in the recipe, I couldn’t resist adding some chopped cilantro when I reheated mine.

Shrimp & Corn Chowder with Fennel
Shrimp, corn, fennel, bacon… what’s not to like about this soup?  Some of the commenters on the Real Simple site (where this was taken from) were pretty harsh, saying it was very bland.  I could definitely picture a dash or two of Tabasco, and just a wee bit more salt, but it was far from being as bland as they implied!  (You’re probably starting to think I’m a salt freak at this point, but a pinch of salt can be the difference between bland and just right.  Taste and add as you go… everyone’s taste buds are different!)  Michelle made this with the suggested (optional) bacon and I would too, but I would maybe crumble it in just before serving.  The only other tweak I would consider is adding a bit of cornstarch to give it a thicker, more “chowdery” feel (dissolve cornstarch in cold water before adding to the soup).

African Curried Coconut Soup
This vegan soup was delightful and looks really easy to make. The rice is listed as “optional” but I would definitely include it- not only does it make it a bit more filling, but it’s beneficial to eat rice and legumes together, especially for non-meat eaters.  Sarah added some spinach at the end of the cooking (not in the recipe) and it was a nice touch.

Thanks again, ladies… Can’t wait for our next swap!

8 responses to “soup swap mach II: four soup recipes to see you through ’til spring”