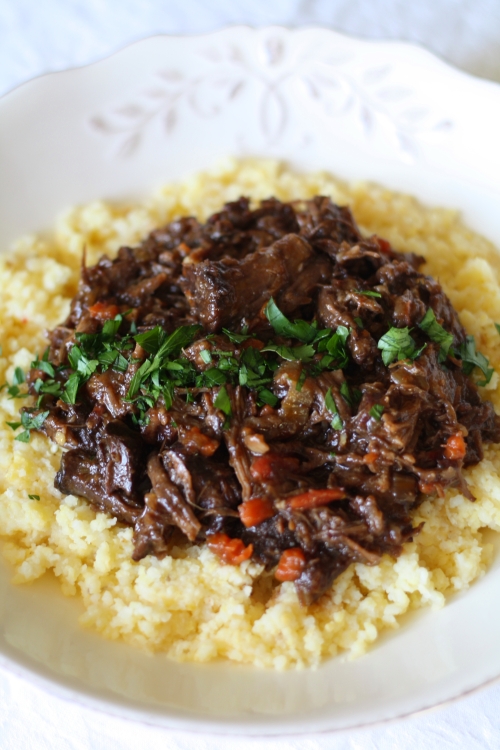 For those of you who read my post last week about our Valentine’s day near-disaster, you know that we had originally planned on having oxtails. I’m happy to report that I was able to make them the next day without any problems, although we did still eat late, around 9PM. This really is a dish to make the day before, or to start first thing in the morning!

I wanted to make oxtails for many reasons- because I’d never had them before; because I’d read recipes in 2 of my favorite cookbooks saying how great they were; and, OK, just because it’s a cut of meat with a cool-sounding name!

(I have to pause here and chuckle a bit at a couple friends who asked me, quite innocently, “What are oxtails?” It was as if they couldn’t quite believe it would actually be what it sounded like. I hope the photos give you a vivid understanding!)

I’m going to be lazy and not post the whole recipe for the oxtails, since it runs a few pages long, and because I think you can probably get a good oxtail recipe several places on the internets. I read two different recipes before settling on one- one was from the Zuni Café Cookbook, and the other from All About Braising. I chose the latter, not for any reason in particular except that it seemed slightly simpler (that, and the fact that I don’t often have an excuse to use a whole bottle of wine in a recipe). 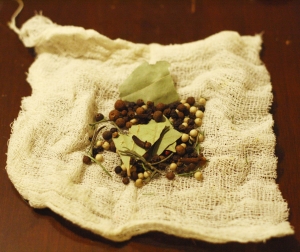 To start, after trimming as much fat as I possibly could, I marinated the meat in a bottle of wine with a sachet of aromatics in cheesecloth: bay leaves, peppercorns & allspice. The allspice made it smell like mulled wine after it had sat for a day, and I was afraid its flavor was going to be too dominant, but it turned out fine. The instruction to marinate the meat for a day or so caused me to ponder: wouldn’t this cause the wine to oxidize and lose flavor? We used a pretty decent bottle of wine on this recipe since we were “splurging” for Valentine’s day, but I have to wonder if after being open to the air all that time, plus the 4-hour cooking time, would anyone be able to tell the slightest difference between that and something for $4 from Trader Joe’s?

The recipe instructed me to broil the meat before braising, to get it browned. I liked this method; you just have to keep a careful eye because it can quickly go from browned to blackened. Meanwhile, I cooked onions, carrot, celery and garlic with diced pancetta. I have to say, I thought the pancetta was gilding the lily a bit given how much fat was in the oxtails, and I don’t know that I would have missed it had I used olive oil instead. (The Zuni Café recipe actually called for a pig’s foot to add “body” to the braising liquid!! Call me a philistine, and I do love my pork, but I think there’s plenty enough bones and fat in oxtails without having to pork it up.) After the veg was cooked and the bottom of the pan started to get brown, I added some tomato paste and dried porcini mushrooms that had been soaked in warm water, and then a couple tbs brandy to deglaze the pan. The next step was to add the wine, mushroom liquid and some stock in stages and reduce it on the stove. Then the meat went in the pot, nestled tightly so it was nearly covered by the braising liquid, and into a 300-degree oven it went.

The recipe I used suggested a 4-hour braise, but after 3 1/2 hours we were getting pretty hungry so I pulled the meat out to check it. It looked plenty tender, so I removed the meat from the braise with tongs and let it cool a bit. I’m glad I decided to take it off the bone before serving, because it was so incredibly fatty that we would have ended up eating big chunks of fat had I not separated the meat and thrown a lot of the fat away. Despite my best efforts, a good deal of fat still made it back into the dish because it was so marbled in with the meat. I probably skimmed about 1 1/2 cups of liquid fat from the braising liquid as well. I knew this wasn’t going to be diet food, but I had no idea it would be THAT fatty. I am pretty inexperienced with beef though!

The meat and braising liquid (more of a compote at this stage) formed a thick, chunky ragu that we served over polenta. Chopped fresh parsley was an absolute must- I don’t know about you, but I need to taste a little something fresh and green on my palate when eating a rich meat dish. I didn’t completely shred the meat; I tried to leave it in bigger chunks, but once it was separated from the bone it pretty much fell apart. I hadn’t intended it to be a “sauce” necessarily, but then I had never made it before so didn’t know quite what to expect. I added a small amount of tomato juice and diced tomatoes (from a can) to loosen the sauce a bit and add a bright acidic note to counterbalance the richness. I think if I made it again, I would add a can of tomatoes to the braise instead of just tomato paste. That was what the Zuni recipe called for. But I think in the recipe I used, the wine was supposed to be the star ingredient; perhaps more tomato would have thrown off the balance.

We definitely enjoyed this dish immensely, and I’m glad I got to try my hand at something new, but I’m not sure if it will become part of my repertoire. For one thing, the cost of the dish was just about as much as a fancy dinner for two in a restaurant! In addition to the $13 bottle of wine we dumped in there, the cheapest oxtails we found were at the Honeybee Market for $3.50/lb, and it called for 5 lbs. I would guesstimate that we ended up with less than a pound of actual meat at the end of the cooking process. I do kind of want to try Judy Rodgers’ recipe at some point for comparison’s sake though- she salts the meat a day ahead rather than marinating it, and her recipe calls for less wine (1 3/4 cup) and more tomatoes. I also wouldn’t mind trying an oxtail recipe from a different part of the world- my cousin mentioned she’d had a Chinese-style oxtail dish with star anise and it intrigued me!